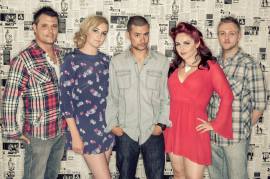 Unsung Lilly, are a five-piece band from deepest Surrey led by two formidable female vocalists, Sera and Frankie, and backed by a male trio of expert musicians, Wayne, Russ and Allan.  They are the epitome of a fresh, contemporary and very relevant mainstream pop band.  Their songs are original, catchy and authentic with many different musical styles and influences woven into each and every song.

Their long-awaited album ‘Be’ is a collection of 14 self-penned and self-produced songs which the band chose to release via a Pledge Music campaign to allow their fans to pre-order and in doing so help to fund its release.  Following the success of this campaign, the album will be available from the band’s website from Monday 16th September.

As is common with independent self-produced and self-released albums, all 14 tracks are strong and very likable, which represent excellent value for money.  When was the last time you bought an album from a signed mainstream artist and found each and every track to your liking? 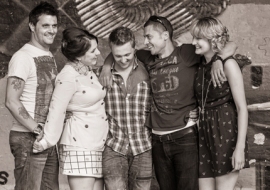 I have chosen five tracks at random to review, and have added a sixth, which the band kindly sent me for exclusive airplay ahead of the album’s release and I must confess put a huge smile on my face when I first listened to it.

Silence is a beautiful, heartfelt soulful ballad featuring the delicious vocals of Sera, initially accompanied by simple guitar and piano chords, and soon builds into a rather anthemic chorus.  Close your eyes, and you’ll be transported to a candlelit room.

I Remember is another ballad which is as delightful as it is melancholic.  It also happens to be one of Sera’s favourites, and here she tells us why:

I love how this song came about…. I was on a tour bus in Switzerland and suddenly all these words started coming into my head..it was like they were literally coming through me as opposed to coming from me. I wrote them all out on my phone and emailed them over to Frankie, who was back in the UK. It just so happens that at that exact same time she’d been playing around with chord and melody ideas… and crazily, it all fitted together! Within about 30mins she emailed me back with a song! It’s the only song we’ve written like that (i.e. doing bits separately and not even in the same country). It was supposed to be a hidden track at the end of the album but we love it so much we decided not to do that in the end!

Just Be is a catchy, melodic and rather funky number, one of those songs that takes over the part of the brain that controls movement and sends your muscles into spasms turning you into John Travolta or Patrick Swayze!  This is an uplifting number with a very clear message to anyone who feels burdened by peer pressure to be something they are not.  The chorus says it all – Just Be, everyone else is taken… Very wise words.

Caught Up In A Moment  arrives as a guitar-laden, rocky uptempo number which soon turns into a very infectious soulful pop anthem with catchy choruses, perfect harmonies from Frankie and Sera, and expert instrumentation from the boys.  Great production, fantastic arrangements and solid vocals.

Let Us Be is another uptempo number which starts with the cosmic 70’s sound of a guitar on full reverb, soon joined by a very interesting afro percussion arrangement.  Just as your toes begin to tap, Sera’s unmistakable vocals kick-in like an MC on a Hip-Hop track.  Frankie soon joins the party with her bluesy soulful tones perfectly complimenting Sera’s melodic rap.  This is a full-on production which leaves the listener under no illusion this is a band at the top of their game and they mean business!a

As the first few bars of I Ain’t Got The Blues ooze out you just know this is going to be a classy number with some very delicate soulful guitar licks and piano chords accompanied by the slightest percussion and bass.  Your prediction is confirmed as soon as Frankie’s vocals burst full of blues, soul and more than a dash of gospel.  She is soon joined by Sera’s delicious harmonies and the song just takes you to a parallel universe where Motown meets BlueNote meets Philly meets Led Zep!

This, ladies and gentlemen is no ordinary album and this is certainly no ordinary band, for goodness sake, Unsung Lilly played in front of 300,000 people in Hyde Park during the Royal Wedding celebrations in 2011, and that ain’t no ordinary feat!

Buy the album before someone tells you it is one of the ‘must have’ albums in any music lover’s collection.  Oh, I do believe I have just told you that!