t’s a cliché I know, but Chess, also known as Fran Galea, is a diminutive character who exudes personality, great artistic ability and above all, her voice has the power and harmonic range to blow the cobwebs in the shed at the bottom of the garden.  On top of that, she is blessed with stunning Mediterranean features.

Originally from Malta, this young songstress has made a home in the leafy heart of Surrey where she came to complete her studies at the world-renowned Academy of Contemporary Music (ACM) in Guildford.  Having  had a reasonable amount of success in her native Malta, she is now pursuing her music

al ambitions here in the UK with a new EP plus plans to take her career to new levels.

Chess has a natural charm, infectious smile, and when she sings you can’t help but listen in awe to her powerful and very versatile voice.  Her songs are polished pop numbers which could easily find themselves in mainstream radio.  Below you will find videos of two of the songs she performed on Under The Radar plus of course the show in full for your listening pleasure. 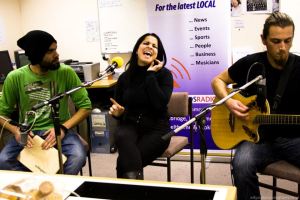 Check out her website, buy her music and catch her at a gig near you!

Things Take Time, recorded live on Under The Radar on Brooklands Radio