Exploding musical energy delivered straight to your ears by the mighty John Wyse and his men. Ladies and gentlemen, we give you Silverbox!

One of the most charismatic, flamboyant and effervescent band leaders I have met!  John Wyse is the eloquent, outgoing, supremely talented vocalist who fronts London-based indie rock band Silverbox.  They visited the Brooklands Radio studios on a dark and chilly January evening for what turned out to be a magical, memorable stripped back acoustic session. 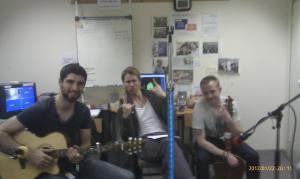 Silverbox are a five-piece rock ‘n roll band first and foremost.  They ooze raw energy, chaotic flamboyancy, and they deliver this mix with great musicianship, very likeable songs and real passion.  Their live shows attract a growing and very eclectic mix of faithful followers, and their uncompromising approach to putting on a show rather than just a gig sets them apart from many of the hottest up and coming London-based bands.

John has that rare ability to switch from a full-blown monster adrenaline-charged anthemic number which has his audience in a frenzy, to a raw and passionate acoustic solo where they are turned into a mass of smiling faces and their bodies are riddled with goosebumps.

For this Under The Radar session, John was accompanied by his guitarist Julian Samos and his drummer Kerry Thompson.  Below are two videos from this session, plus the show in full.  Enjoy!

Silverbox perform their powerful ballad “Gravity”.  Here John talks us through the song which he then goes on to perform live and acoustic.

Here you can listen to the whole show!